You are here: Home1 / The Studbook

The Dutch Tinker Studbook NSvT was established in October 1999 and is the only officially recognized Tinker Studbook in the Netherlands and Europe. The Dutch Studbook for Tinkers has been European mother studbook since March 2000. The NSvT is an “open” studbook. Any horse that meets the breed standard of a Tinker, assessed by the jury on an exterior inspection, can be entered into the studbook.

The NSvT aims to:
Monitoring, guaranteeing and promoting the breeding and use of the Tinker. 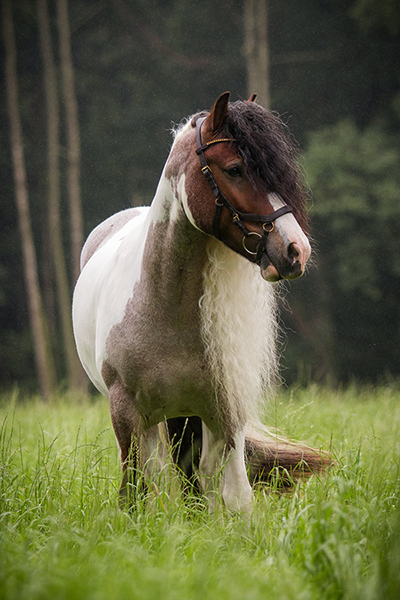 Since January 2004 it is mandatory for every four-legged friend to have their own passport. Since then, there has been a national identification & registration system. Every owner of a horse, pony or donkey must have passports for all his animals and have the animals chipped. Registration can take place at the studbook. Foals must have a passport and chip within six months of birth. Chip exemption is no longer possible.

When applying, the owner is mentioned in the passport. However, the passport is not a legal proof of ownership. The passport should always remain with the horse or pony and can be requested at any time. When sold, the passport remains with the animal. Previously issued passports remain valid. Horses may not be transported without a passport. An exception to this is the not yet weaned foal at the mother's foot.

Passports become invalid if written, pasted, signed, sketched, etc. in them by persons who are not authorized to do so under the Regulation. For example, the owner may only indicate in the passport whether a horse is intended for slaughter or not. That's all. So if an owner himself changes data in a passport, this passport becomes invalid. If a passport has become invalid, it is confiscated and a duplicate passport is issued at the owner's expense.

The following vaccination schedule is also seen as a correct basic vaccination: first two vaccinations with a minimum of 3 weeks and a maximum of 92 days in between, and then the horse must be vaccinated again within a year of the previous one.

For inclusion in the Studbook, the mare must come to the inspection. If this does not happen, she will remain registered in the foal book. If this (Foal Book) mare gets a foal herself, a note will be made in the passport that the mare is still included in the Foal Book.

The same applies to mares that are registered as Registered Foals in the so-called Register Foal Book and that have a foal of their own. Here comes the note in the passport that the mother is still included in the Register Foal book. Descendants then end up in Bijboek I.

Send Passport
If this is the case, always send your passports by registered mail to prevent them from being lost by post. In the event of loss (or theft), you must report it to the police and request a duplicate passport. This is a very expensive affair (EUR 80.00). We act in accordance with the official regulations of the PVE.

(Import)horse
An (import) horse must be provided with a passport within 30 days, in accordance with the application procedure via the I&R form. If your horse already has a passport, you must register this passport and the details of the horse with a passport-issuing agency recognized in the Netherlands, the period of 30 days also applies here.

ascription
If you sell your horse or you have bought a horse, the name in the passport must be changed.

For the seller: you must complete the transfer form (owner details) and send it digitally to the studbook office.

For the buyer: if the selling party has not had the registration done, you must complete the transfer form yourself and send it digitally to the studbook office. Eea is included in the studbook/registration regulations.

Birth foal
The birth of your foal is a happy fact. The NSvT does not want to disturb this by obliging you to come to an inspection with the animal in order to have it admitted. If you are not able to come to an inspection, we offer the possibility to fill in a form, so that the foal can be admitted at home. After sending the form, the studbook consultant will contact you and make an appointment.

Death horse
The death of a Tinker, whether it be an unexpected sudden death or an active termination of life, is always an emotional event. The NSvT therefore offers its members the opportunity to report the event in a simple manner without having to make difficult telephone conversations. Filling in the e-form and sending it will inform the studbook of the event. You still need to send the Tinker's passport to the studbook office so that it can be invalidated by the studbook. If necessary, it can be returned afterwards.

Data changes
Information about you as a member of our studbook can of course also change, such as moving house or new telephone number. In order to keep our administration up to date, we would like to receive a message as soon as possible!

In 2008 we introduced the Best Going Riding Horse competition. This competition can be held every year during the Central Inspection. Important conditions to participate? Your horse must be at least 3 years old and registered and typed for the NSvT. You can start with a mare, stallion or gelding, western or English ridden, it doesn't matter. If your horse knows the walk, trot and canter and can be steered well, it will be fine.

The aim is to test the horse's talent for dressage. We do this on the basis of a protocol. The maximum number of points that can be obtained is 100. The scoring applies as follows: walk (20), trot (20), canter (20), carriage and suppleness (20) and general impression (20). The competitions are held in a ring of at least 20 x 40 meters. The judging is in the expert hands of an experienced KNHS jury member.

During the competition, 1 rider may ride 1 horse per class. A winner will be announced for each category. If there is a tie after the match, the score for the overall impression is decisive. If there is still a tie, then the figure for flexibility/relaxation is decisive.

No special regulations apply (for the time being) with regard to the bridle of the horse and the clothing of the rider. The goal is to judge the Tinker and not the rider. However, a neat and safe presentation is appreciated. The use of a safety cap is mandatory. No training aids may be used during the competition. In addition to the discipline regulations, the veterinary regulations, the I&R regulations and the doping regulations of the KNHS also apply to this competition. Vaccination according to inspection regulations. www.knhs.nl

Best going riding horse 3-year-olds
In this test, less is asked of the horse than in the regular Best Going classes. The groups consist of a maximum of 3 horses, the horses walk and trot together for a few laps on both hands and canter individually 1 lap on each hand. Any other horses in the group are then held by a groom or 'catcher' in the middle of the arena. A groom or 'catcher' must also be present during the drafting process.

Participation in activities is at your own risk. The location and the NSvT cannot be held liable in any way for accidents, damage, etc., which may happen to the participants, spectators, equipment, etc.